We were thrilled and excited to come across this newly presented Synergo® data at the last Auro National Congress. Dr. Canepa, Dr. Campodonico and team presented their long term outcomes of treatment in Genova centres, Italy.

Aim of the study: evaluate the long-term experience on a treatment combining intravesical hyperthermia with Mytomicin C (HT-MMC) delivered with the Synergo® device.
More than 1600 treatments performed since 2004
146 Intermediate and High-risk NMIBC patients
37/146 patients reported a recurrence and 14/146 patients presented a progression.
The Recurrence Free Survival at 1, 2 and 5 years was 89.6%, 79.2 and 68.3 respectively.
Progression Free Survival at 1, 2 and 5 years was 98%, 96.2 and 83.7 respectively.
The number of treatment sessions for each patients were 10.4+/- 4.7 with a median of 11 sessions (Range 4-31). The time of exposure over 42°C was 37.4+/-7.4 mins. and the mean temperature was 42.0+/-0.8°C. The safety profile showed mainly grade 1 and 2 side effects. Ten patients complained grade 3 side-effects, including 1 patient bladder spasms/pain during treatment, 3 patients dysuria and 6 patients urgency after treatment.
Presented at: XXIII Congresso Nazionale Auro May 2016 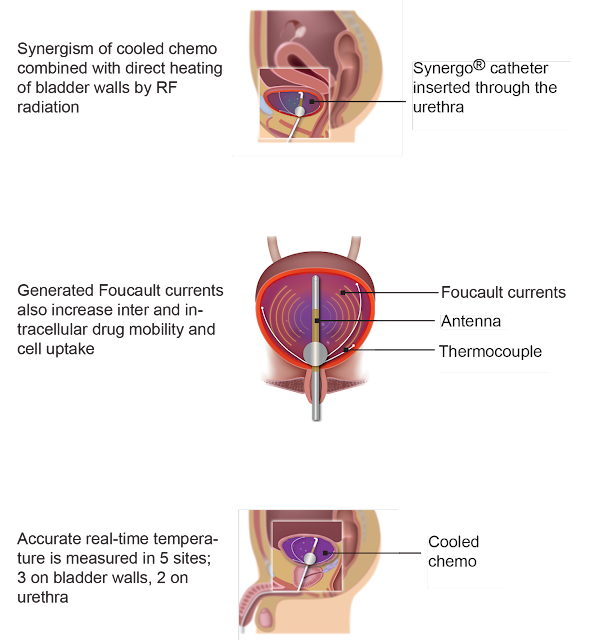 Basic Science Behind NMIBC and its Treatment

The established “two-pathway” model of bladder cancer suggests epithelial hyperplasia and recruitment of branching vasculature as the pathway for the development of papillary NMIBC.
The healthy urothelium is about 60 μm thick. The increase in the epithelial thickness in malignancy reflects the increase in cell dimensions in basal and intermediate layers. 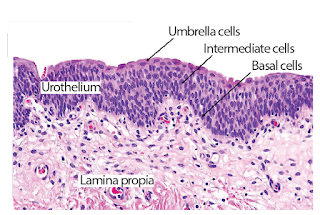 Tumours originating from basal cells were shown to be associated with the worst outcome. Invasive carcinomas arise clonally from a single cell progeny, initially generating a precursor CIS lesion. Basal cells are likely progenitors of CIS, muscle-invasive lesions and SCC, depending on the genetic background. Cancer stem cells are infamous for their inherent diminished susceptibility to treatment and for being generally difficult
to reach. They were suggested to contribute to therapeutic resistance through repopulation of residual tumours between chemotherapy cycles. Morphologically “normal” or dysplastic urothelium contains alterations found in tumour, pointing to spread of tumour cells or tumour development within the adjacent urothelium. Although some patients develop a true oligoclonal disease, tumours in the same patient are mostly related, showing evidence of subclonal evolution in different lesions. Genetic alterations pertinent to urothelial tumours are frequently found in the adjacent stromal cells. The importance of tumour milieu (surrounding stromal cells, extracellular matrix) in bladder cancer development is further underscored by its role in epithelial-to-mesenchymal transition (EMT). Cell invasivity and drug resistance then appear to increase in parallel with their angiogenetic and metastatic ability, thus contributing to tumourigenesis, tumour progression, and metastasis formation. Stromal cell types shown to contribute to bladder cancer progression include the mesenchymal stem cells and tumour-associated fibroblasts.
The immune system is another important determinant of tumour environment. The tumour-associated macrophages (TAMs) count in invasive cancers is significantly higher than in superficial cancers, and, correlates with TNM classification, tumour grade, vascular invasion, distant metastasis, response to BCG treatment and higher rates of cystectomy. Conversely, tumour infiltration by both Cytotoxic T-cells (CD68+) and T-cells in general (CD3+) promotes survival in patients with urothelial carcinoma.
The nature of immunological response induced by different molecular subtypes of urothelial carcinoma is independent of tumour stage and includes both TILs (Tumour-Infiltrating Lymphocytes) and TAMs. The strongest association with poor survival was observed for a high ratio between CD68+and CD3+. Susceptibility to specific drugs is more likely to be associated with the molecular stratification, rather than with pathologic classification.
To reduce the risk of bladder cancer recurrence and/or progression effectively, a treatment must ideally
a) Have an impact on cancer stem cells, harbouring the innermost tumour locations; b) Exert force on cellular and extracellular components on both sides of the basal membrane, to disrupt or transform the potentially disastrous interplay; and c) Modify the type of immunological response in the tumour vicinity to help offset cancer propagation.
The efficacy of Radiofrequency-Assisted chemotherapy instillation on drug diffusion was demonstrated with
Mitomycin C diffusing 6-fold higher using Synergo® RITE. MMC penetration of the bladder wall and cells can be explained by inter and intracellular drug-mobilising electric (“Foucault”) currents produced by the RF radiation and very efficient deep heat delivery. The same currents are also responsible for the cellular membrane "micro-poring" that enhance drug uptake, owing to ionic transfer. Tumour recurrence is substantially reduced following MMC via Synergo® RITE treatment compared with “conventional” MMC, or BCG instillation, and disease progression is reduced, even in patients presenting with CIS, G3 and patients failing BCG prior to Synergo® RITE treatment. As the available data on conductive heat-assisted MMC instillation indicates, it differs greatly from that of Synergo® RITE and it is apparent that the effect of Synergo® RITE cannot be explained by heat alone. Furthermore, it was demonstrated that liquid at 50-60°C irrigating the human bladder for up to two hours, did not destroy the urothelium (no denaturation of proteins took place) implying that the tissue was not effectively heated. A unique pattern of humoural and cell-mediated immunological response observed in patients treated with MMC via Synergo® RITE could also be a contributing factor in the apparently low recurrence and progression figures reported, even in high-risk patients. Early histological findings following treatment with MMC via Synergo® RITE show stromal behaviour post treatment. Intense vasodilatation and mainly lymphocytic infiltrate in peri-tumoural regions
were the hallmark of treatment with MMC via Synergo® RITE ˗ effects not seen with conventional or heated MMC instillation. Moreover, treatment with MMC via Synergo® RITE shows elevated urinary cytokine levels, with MCP-1 and IL-6 levels being significantly higher as well as increased macrophage-derived chemokine levels.