We are at the doorstep of an exciting era in which the due importance of Radiofrequency treatment for cancer (and possibly many other ailments) is being finally and gradually revealed.

Multiple studies are being conducted into this exciting field and plausible explanations of pathways are being suggested. Field in which these selective non-thermal effects have been shown include, and are not limited to treatment of Non-Small Cell Lung Cell Carcinoma, Glioblastoma, Bladder Cancer and Pancreatic Cancer.

Synergo incorporates a 915MHz generator, responsible for delivering microwave (the high end of the RF frequencies) in the treatment of bladder cancer. This RF is regulated in real-time by the operator (up to 36W).

One of the questions that is often raised is what effect the RF has on the cancer cells.

2 independent studies present explanations to these effects and how RF operates.

An article published in 2015 by Ware et al. demonstrates that RF radiation creates micropores selectively on cancer cells and disconnects the adhesion between cancer cells. The writers conclude that there are clear phenotypical differences observed between cancerous and normal cells in both their untreated states and in their response to RF therapy. They also reported, for the first time, a transfer of microsized particles through tunneling nanotubes, which were produced by cancer cells in response to RF therapy. They provided evidence that various sub-populations of cancer cells heterogeneously respond to RF treatment.

Another article published by Curley et al. in 2014 compared how RF and hyperthermia (HT) treatments change the proliferation rate, oxygen consumption and autophagy in malignant and nonmalignant cells and their results were clear.

Their conclusion: “The results obtained in the current study, along with our previous reports, indicate the ability of RF treatment to provide a tumor-specific cytotoxic effect by inhibiting the proliferation and mitochondrial activity of tumor cells and the stimulation of autophagy. These effects exceed the hyperthermic property of the RF field. All of this assures further investigation of the biological effects of RF treatment to stimulate the development of novel, non-invasive approaches for cancer treatment using electromagnetic fields.”

We are proud and honoured to share an article published in October 2020, by Denosshan Sri et al. St Georges Urology Centre (London) on Urologic Oncology.

The article presents a retrospective study of a prospective cystectomy database. Inclusion criteria were HRNMIBC with BCG failure undergoing cystectomy.

Thirty-six patients who received RITE-MMC underwent cystectomy, compared to 102 that did not. Median ages were comparable at 72 and 69 years, respectively. Patients were followed up for a median of 24 months across the 2 groups. The commonest histological stage in both groups was CIS. There were no significant differences in intraoperative blood loss, length of stay and 90-day readmission between the 2 groups. There were proportionally fewer recurrences in the RITE-MMC group (16% vs. 19%) and median time to recurrence was longer in the RITE-MMC group (37 months vs. 24 months). Multivariate analysis did not reveal a significant correlation between pre-op RITE-MMC and post-operative readmission (P = 0.606). Survival curves show no significant difference in time to recurrence across both groups (P = 0.513), and no overall (P = 0.069) or cancer specific mortality (P = 0.129) dis-advantage was noted in the RITE-MMC group.

ConclusionWe have found that RITE-MMC treatment does not result in a technically more challenging cystectomy and does not compromise oncological outcome compared to those patients undergoing cystectomy immediately post-BCG failure. We feel RITE-MMC remains a useful tool in a carefully selected group of patients who may not be willing to accept the morbidity of a cystectomy at the time, without significantly compromising their long-term outcome.

St Georges University Hospital Urological centre is one of the leading Referral Centres of Synergo worldwide and its dedicated team accumulated a vast experience over the past 16 years with Synergo Radiofrequency-Induced ThermoChemotherapy (RITE).

One may note that, as such, the referrals to the hospital for cystectomy constitutes a very high number, and seeing the relatively few cystectomies carried out on patients whom previously received radiofrequency treatment in the bladder prompts hope for many patients who opt to preserve their bladders despite the indication for a radical surgery.

This researcher’s group has presented their bladder preservation study in over 10 years follow-up (Link to the study), and this new article sheds light on the possibility of administering RITE as a last step before radical cystectomy (as recurrence and progression rates are oncologically similar), while in the relatively low percentage of patients who would fail this modality over time, a surgery would not impose a greater risk of complications than in an early cystectomy.

Synergo at the very outset. The year is 1995. A group of urologists and scientists at HSR publishes its first article and presents a new device based on a microwave source delivering local bladder hyperthermia together with intravesical chemotherapy. 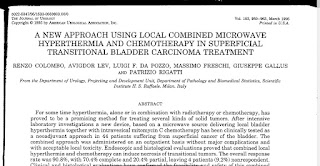 Positive, repetitive results have led to the development of the “Synergo®”.

Starting as early as 1992 and continuously to date clinical trials have been conducted to study the benefits of combined treatment of Synergo® over chemotherapy and immunotherapy alone for people who suffer from NMIBC and other tumors in the bladder. The treatment has become a common practice in leading centres both as a prophylactic treatment (after TUR) and ablative treatment (for tumour eradication).

Photo below: pre-Synergo: transurethral microwave bladder with chemo instillation. A lamp was used to hold the embedded antenna within the silicone catheter. 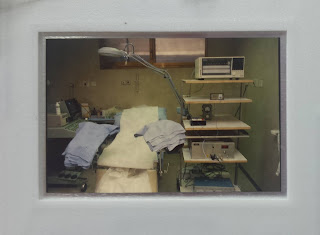 Photo: 25 years ago! Synergo at the very outset. A designed device. Arm replaces the lamp. 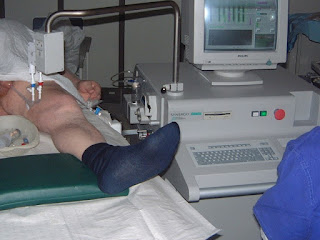 A study comparing the effects of two techniques combined with chemotherapy on cell viability of bladder cancer cells in vitro.

Posted by Medical Enterprises Group at 01:03 No comments:

Together, we are facing a truly unprecedented situation. The global coronavirus pandemic is affecting all of our families, our businesses, our communities, and our way of life.
We are truly inspired by the selfless healthcare workers around the world who are on the front lines working tirelessly to care for people in need.

We wish you and your families stay safe & healthy, gradual and phased return, as we continue to work together as a collective community to support business continuity and each other.