The Synergo booth at the recent BAUS meeting in Liverpool was well-attended by both British and overseas urologists. Over the past few years I have seen growing interest and also familiarity with the Synergo technology. The group from St. George’s, London, presented a 7-year study of 100 HR-NMIBC patients, treated with Synergo, showing a five-year survival comparable to that after cystectomy but with a lower morbidity.

A lively interest was also shown in our upcoming multicentric study in which a number of British Urology Departments will be taking part.

I would like to thank the organisers and BAUS members for making our participation such a memorable one.


Dr. Zvi Bar, Head of Clinical Affairs, has been with MEL for two years. His main responsibilities are in the area of clinical training, seminars and research and development. Zvi joined MEL after a 35 year long career in Anesthesiology during which he held various posts including Head of Dept. of Anesthesiology and Chairman of The Committee ‎for Quality Assurance of The Ramat Marpe Hospital Group, as well as ‎Examiner in Anesthesiology for The Israel Medical Council‎. 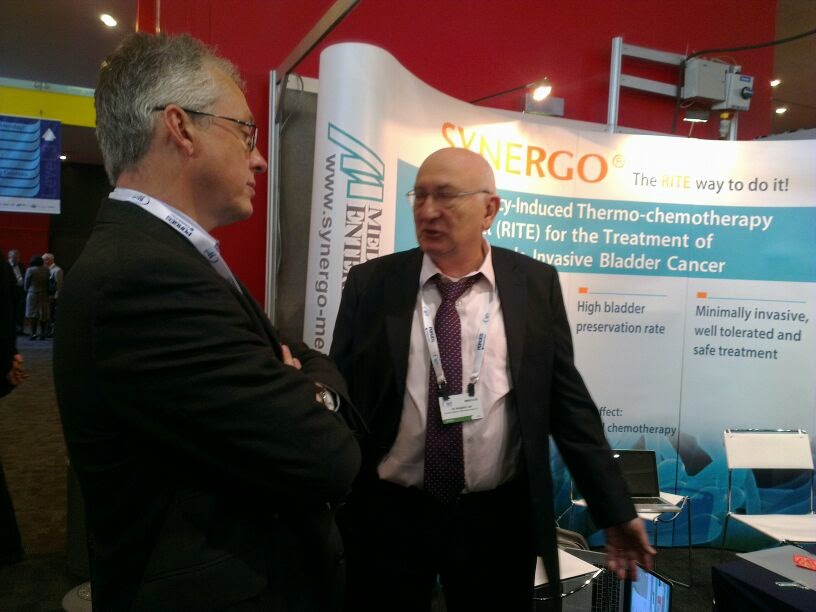 Posted by Medical Enterprises Group at 23:12 No comments:


The last urology meeting in Erlangen was well organized and the Synergo® RITE was well located! Few words in German for those who came to share experience and also just to express their interest. Below is Ms. Reich and her booth neighbour dressed in traditional Bavarian costume. 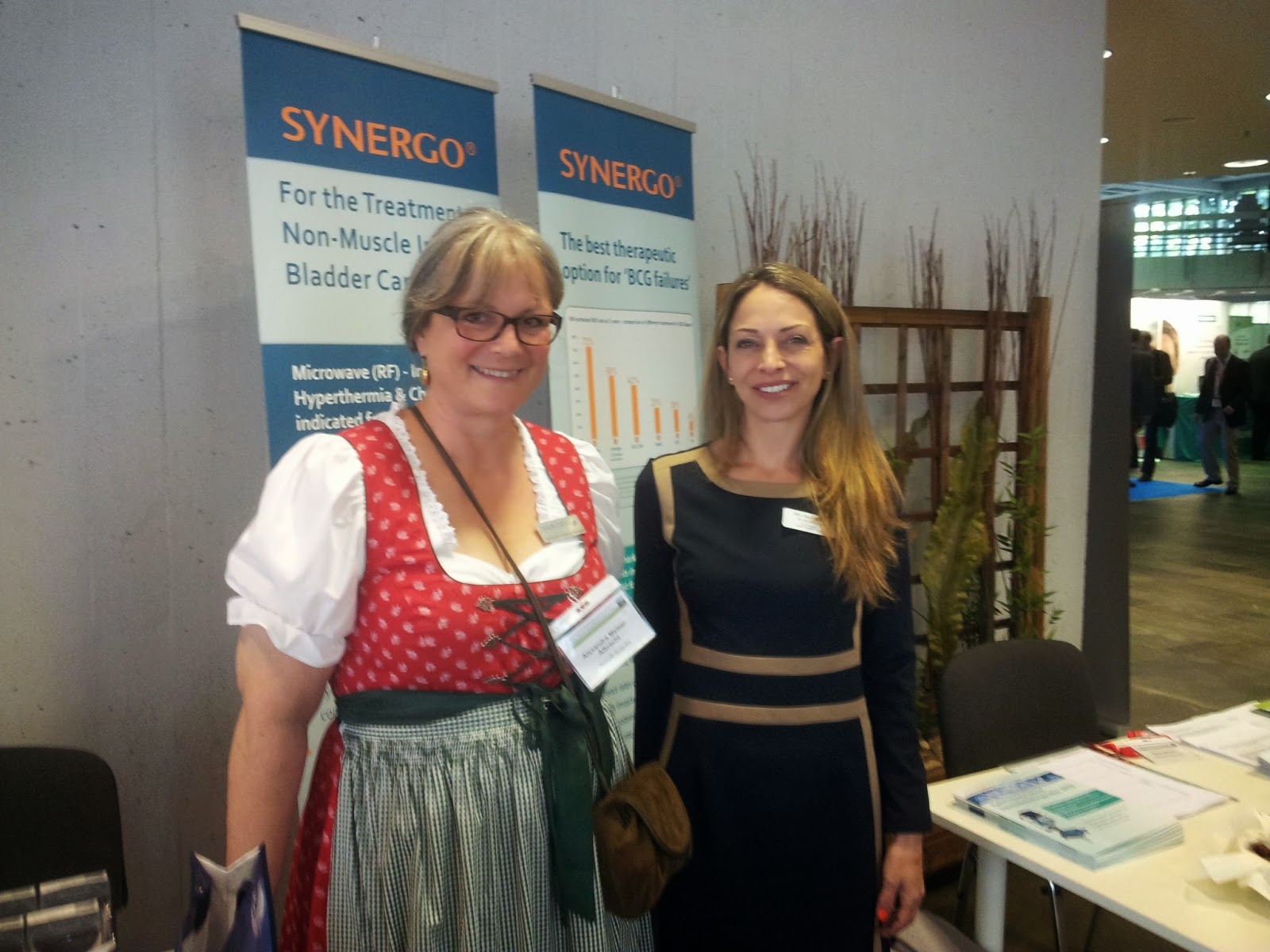 Posted by Medical Enterprises Group at 05:17 No comments:

Synergo at the EAU Annual Meeting 2014

EAU Annual Meeting, April 2014
Medical Enterprises thanks the urology colleagues, teams and organizers for the successful EAU congress in Stockholm this month. The congress was very successful and fruitful. Also many thanks for the new visitors who expressed their interest in the Synergo system.
2 poster sessions were presented at the EAU meeting this year by Mr. Issa and Mr. Nair from the UK. 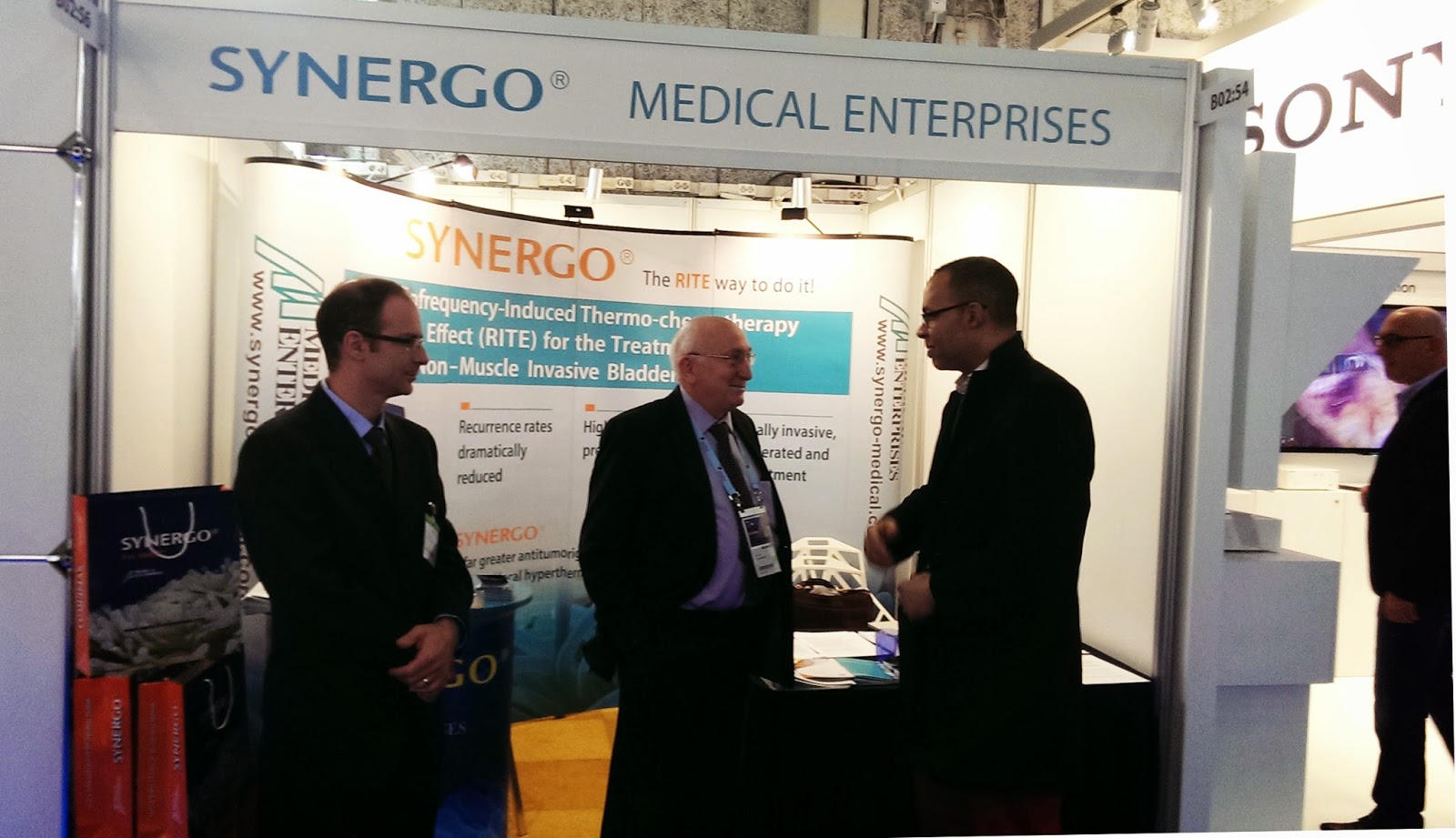 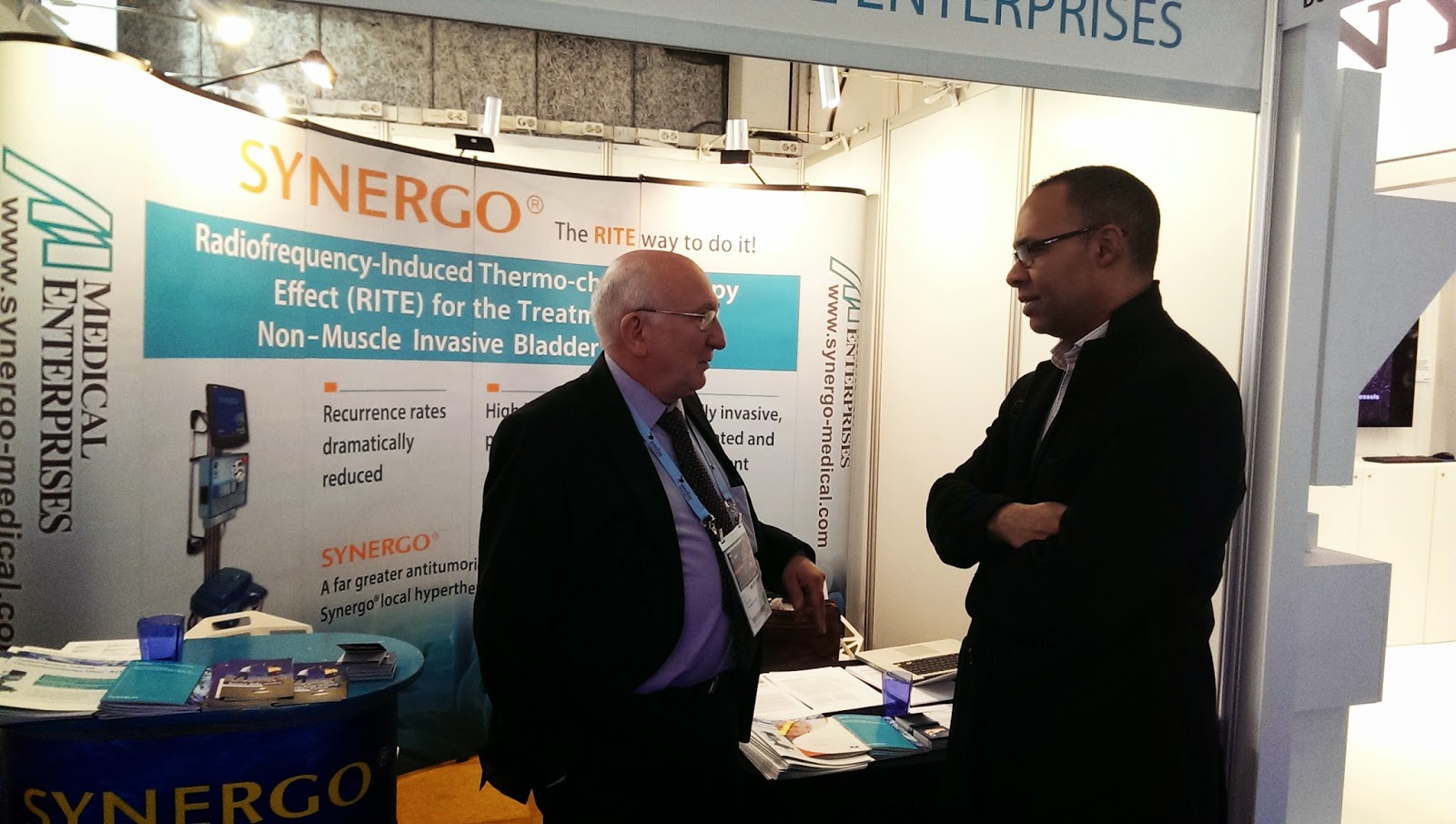 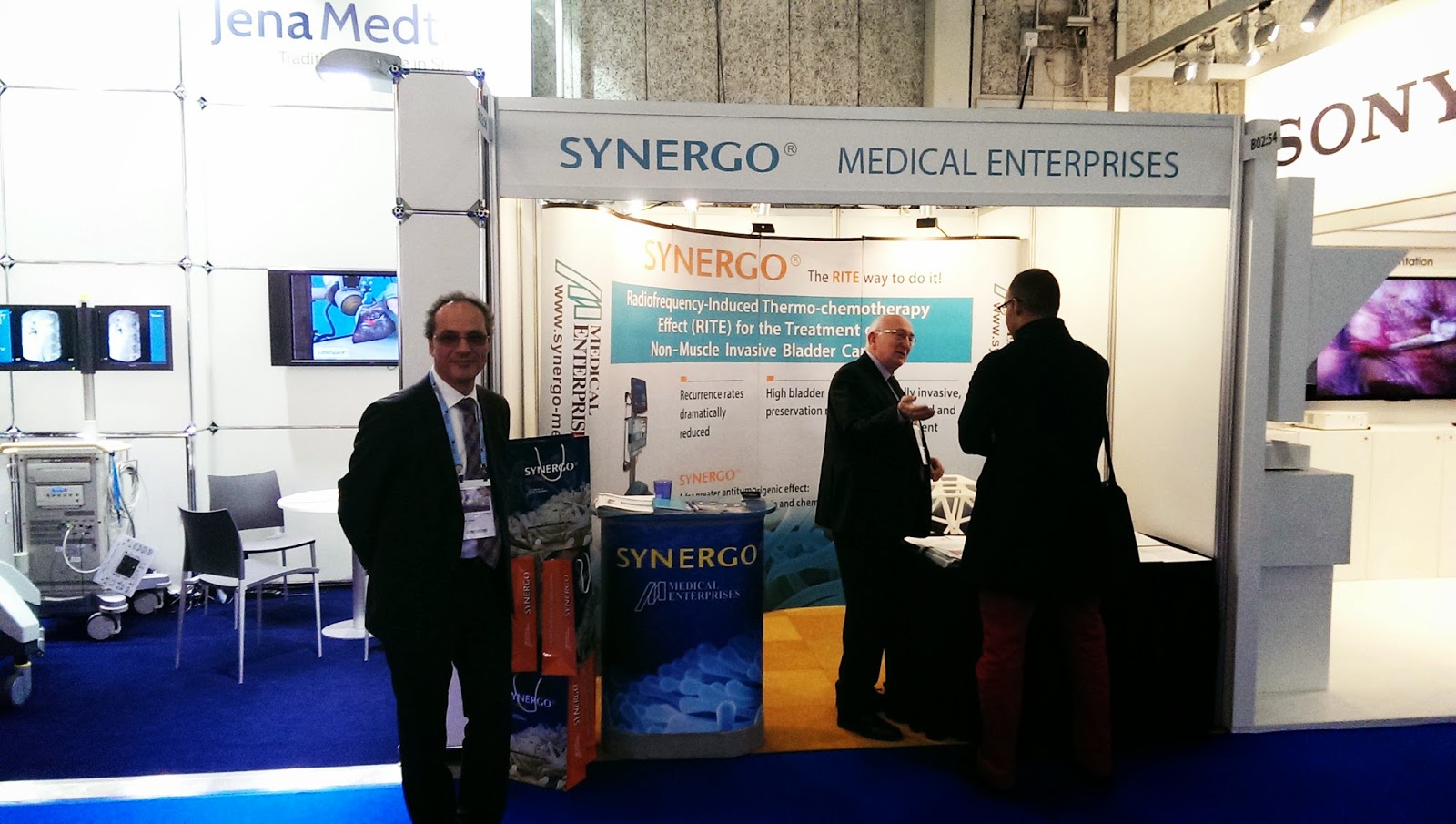 A prospective single-centre review of 96 patients receiving Synergo -HT and matched against 47 cases undergoing RC for High-Risk Non-Muscle Invasive Bladder Cancer. Charlson co-morbidity Index (CCI), and peri- and post-procedure complications were recorded in each group. Post operative pathology, recurrence and progression rates together with five-year overall and disease specific survival were evaluated.
The mean CCI score for patients receiving -HT was significantly higher than RC group (6.1 vs 4.3). Significant complication rates classified as a Clavian-Dindo score of greater than 2, was significantly higher in the RC cohort (21 percent) compared to patients receiving -HT (0 percent).
There were no deaths associated with -HT treatment compared to a ninety-day mortality of four percent in those receiving RC.
Median follow-up was 36 months (3 to 88 months) for both cohorts. Disease specific survival at five years was observed at 85.2 and 74.6 percent in the -HT and the RC cohorts respectively, whilst overall survival figures were 61.9 versus 68.4 percent.
Conclusions: "-HT is both feasible and safe if offered to well selected patients. It provides durable long-term outcomes compared to RC for HR-NMIBC.....there is a clear advantage in complication rates favouring -HT over RC without a significant difference in disease specific or overall survival."

The efficacy and safety of mitomycin-C hyperthermia in the treatment of high risk (HR) non-muscle invasive bladder cancer (NMIBC) in a single regional centre.
A report on seven year experience of -HT, and aim to establish whether it is efficacious in this high risk cohort of patients.
100 patients with HR NMIBC were treated with -HT (3 patients did not complete induction regimen due to side effects,  1 patient developed clinical metastases during the first two weeks of induction course).  96 patients completed induction treatment and had cystoscopy and biopsy at 3 months.  Of these 96 patients, 84 had failed BCG or were intolerant to it.  Patients were given an induction regimen with weekly treatments for 6-8 weeks with -H on an outpatient basis with the Synergo® system SB-TS 101.
Median follow up was 34 months (3 to 88 months). 72% of patients (69/96) had complete response at 3 months, 10% had partial response (10/96) and 18% (17/96) had recurrence. Twenty patients had radical cystectomy.  Eighteen patients had organ confined disease and two patients had T3 disease at histology.  Only one patient developed recurrence of disease after cystectomy. No patients suffered a Clavien-Dindo Complication above 2.
Conclusions: "MMC-HT has comparable five year survival to radical cystectomy in the treatment of high risk superficial bladder cancer after BCG failure. It is well tolerated and can be delivered effectively by a regional centre. In those patients who are medically fit, cystectomy is still a potentially curative option for those patients who fail MMC-HT."
Posted by Medical Enterprises Group at 00:23 2 comments:

Hyperthermia is being used in many medical fields. 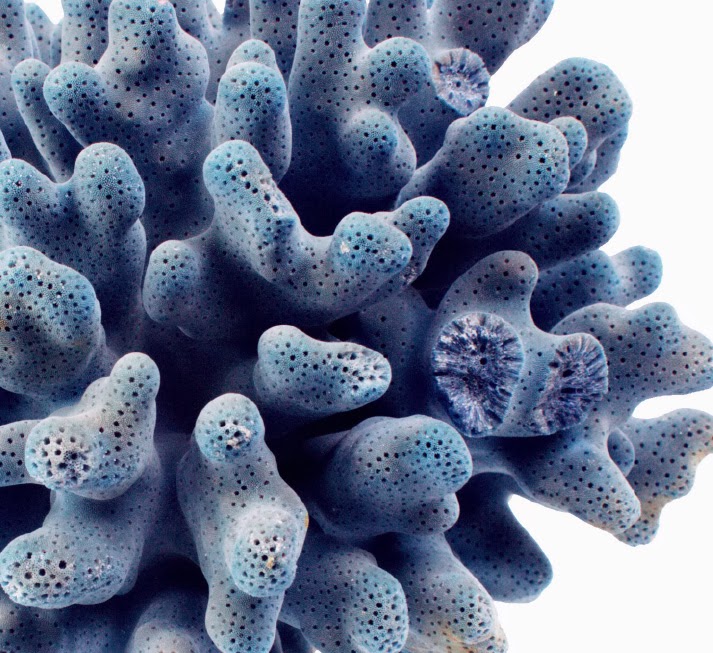 Synergo® uses a unique combination of local microwave energy hyperthermia (heating) with simultaneous instillation of cooled chemotherapeutic drug. The target of hyperthermia is to reach effective temperature inside the tissue to enable higher drug penetration and accelerate drug-DNA reactions.
Tissue heating should be adjusted per patient and dynamically maintained during treatment while the tissue temperature is constantly measured and closely followed.
Conduction is governed by the Boltzmann equation: Heat conduction is proportional to a constant K which cannot be changed: (for example: Kfat=0.2, Kmuscle=0.38, Ksilver=420)
Since the bladder wall acts as a good thermal insulator, heat penetration from heated liquid is not efficient (conduction/convection heating). On the other hand, during microwave heating the energy is absorbed directly deep in the tissue to enable efficient homogeneous heating, real-time measurement and follow-up on the tissue temperature and dynamic adjustment of the transmitted energy for each per patient over time (e.g. when blood flow in tissue is increased due to heating).
Warm liquid does not allow any simple adjustments in order to tailor heating per patient over time (e.g. different patients have different blood circulation, different tissues, dynamic changes that occur over time such as vasodilation etc.)
Moving from hot liquid to microwave radiation in the Synergo® systems was based on previous experience, as well as on articles already published by other researchers.

Richmond A. Owusu et. al describes the effect and mechanism of hyperthermia together with intravescical chemotherapy in his recently published paper (Owusu et al. 2013)."HT has cytotoxic effects on tumour cells via several mechanisms including improved anti-tumour immunity and by direct cytotoxic effects. Heat plays a role in causing cytotoxicity to tumours (additive effect), enhancing drug toxicity to tumours (synergistic effect), and thermosensitization by noncytotoxic drugs....”
Studies, showing the effect of the Synergo® RITE were performed in the 90's by Paroni et.al. (Paroni et al. 1997; Paroni et al. 2001). The findings indicated the clinical effectiveness benefits of RF hyperthermia associated with chemotherapy. The marked effect on bladder wall permeability resulted in enhanced MMC penetration through the urothelium and the tissue layers. It also showed that the dose administered in the Synergo treatment with hyperthermia, consisting of two 30-minute dwell periods of 20 mg MMC each, actually represented a total dose of not less than 40 mg for the 60 minutes treatment. The same study also showed that the MMC solution is not affected by the RITE method.
The re-fueling of the bladder with a fresh instillation of 20 mg MMC solution (following 30 minutes of treatment) after the bladder is drained of residual urine – eliminates the dilution of the drug with urine and thereby maintains a more optimal and homogeneous drug dose throughout the entire treatment duration. This technique also minimizes the inter-patient variability of parameters such as concentration in residual urine and bladder MMC concentration.
Another study made on animals, showed that indeed bladder walls are heated while adjacent organs are not (Rath-Wolfson et al. 2003). It also showed the evenly distributed heating and that the thermometers of the Synergo® reflect faithfully and accurately the temperature of the tissue and not of the liquid in the bladder vault.
In a 2004 study van der Heijden at al. assessed the effect of hyperthermia on mitomycin C-induced cytotoxicity in bladder cancer cell lines (van der Heijden et al. 2004) showing a decrease in cell proliferation after treatment with increasing concentrations MMC. The apparent synergy of chemotherapeutics and hyperthermia was further addressed by the same group demonstrating a similar phenomenon for epirubicin, EO9, mitomycin C and, to a lesser extent, gemcitabine (van der Heijden et al. 2005).

Posted by Medical Enterprises Group at 01:07 No comments:

Posted by Medical Enterprises Group at 03:20 No comments: